I’m not on board with single-payer health coverage, but that’s despite the novel, Universal Coverage, by Daniel Putkowski. 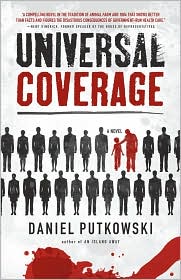 I’m not on board with single-payer health coverage, but that’s despite the novel, Universal Coverage, by Daniel Putkowski. The novel sets out to illustrate that, on balance, a single-payer system won’t deliver on its promises. I tried to read the work as a skeptic, asking myself, would I come away convinced by its end. Unfortunately, I don’t think so.

The book centers on the Smith family. Robert and Hannah are enthusiastic supporters of the charismatic unnamed president and his sweeping healthcare reform called Universal Coverage. They are eager to believe the president’s promises and have worked to get him elected and reelected. Smith even gets to shake hands with him at the ceremony where the president announces his plan to redevelop a section of Philadelphia, awarding a contract to the company Smith works for.

Then the Smiths get to experience firsthand the healthcare system they so tirelessly supported when their son Timmy blacks out while playing baseball. Though bewildered by the system, the Smiths refuse to give up, determined to reach the end of maze without resorting to the despised and illegal Salvare. The Salvare is a privately operated cruise ship, offering high quality medical services in international waters.

First, the novel’s pluses. Universal Coverage is an easy read (346 pages in paperback). The author does show Universal Coverage’s good side: no co-pays or bills, just 12% off everyone’s paychecks; certainly fair and equitable treatment for all citizens whatever their income level; and competent doctors.

With the other hand, Putkowski puts the Smiths through the inevitable bureaucracy that comes with such a large federal program. The clerks are perfunctory, condescending and unhelpful. Everything is regimented and by the letter of the thick volume called the Universal Coverage Manual. Failure to memorize its innumerable imperatives may result in “clients” inadvertently delaying their own treatment and unwittingly violating the law.

Not only are there long waits to see the physician, but patients are seen in groups rather than singly in a private room. In one case, an elderly woman exposed her chest to the examining doctor with Timmy and the others present.

Unfortunately, the novel suffers in a number of ways. It’s a novel. Primarily it should be entertaining, but I wasn’t drawn into it.  I think the focus was wrong. Putkowski does well in subtle and explicit ways to show the shortcomings of a single-payer system, but at the cost of everything else, especially the characters.

Except for Hannah, who is an off-putting scold, the characters are unremarkable. Putkowski treats the characters  much in the same way that Universal Coverage treats its clients: cases, not people. They’re standees. Flat representations placed in the novel to service Putkowski’s argument.

And I don’t think the argument comes together fully. There’s interstitial matter missing. Someone like myself who is predisposed to agree can fill in those gaps, but if the reader is either agnostic or unsympathetic, then the argumentation must be solid. Why would there be doctor shortages, hospital closings, lack of medical privacy, lines to make appointments, longer waits for the appointments, lotteries for surgeries and underground (or in this case, out to sea) medical care? None of it is explained to Smith or the reader.

The plausibility of the premise is further undermined to a degree by some extraneous details. One is that the 22nd Amendment was repealed, thus allowing the president to be elected for a third term. I don’t understand why this was conceived by the author. It didn’t serve anything in the course of the story. Another is fuel rations. The government now issues citizens so many rations of gas per month. Though at $10 per gallon, wouldn’t such a cost take care of the rationing? I suppose this was added to increase the difficulty in getting Timmy treatment, but Universal Coverage is plenty difficult without it. Also, if the Salvare is illegal, why is the company allowed to air commercials on American television for Smith to view in his home?

All in all, Universal Coverage, though highly topical, is disappointing.

Have you read it? What do you think?

Update (1/29/15) – Bloomberg News report: Your Next Doctor’s Visit Could Get Crowded